How To Recognise The Stories Holding You Back From Business Success 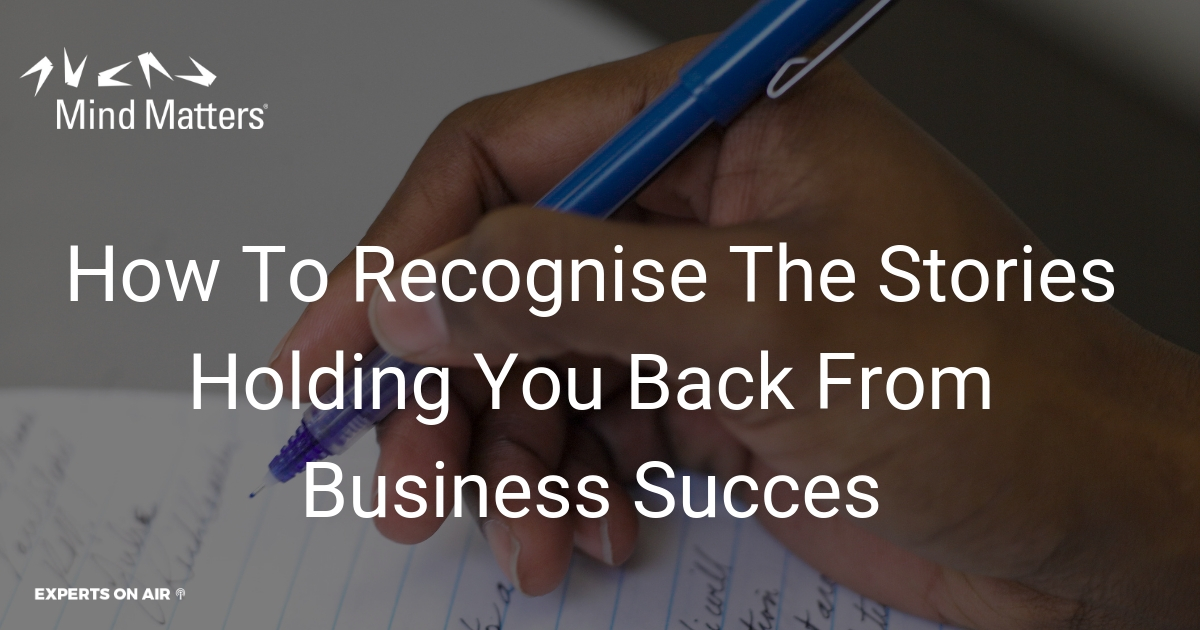 This is the first in a series of three about the stories that frame our sense of self and how we live our life.

In this installment, we’re asking, is everything we say in the moment original? Or do we have a set of patterns that are established over time that form our way of operating, our way of speaking, and our way of believing? Do those potential patterns create the idea of us, the world that we step into every day and the results we get?

Listen to the podcast here or continue reading below.

When we tell our individual story, even though it's usually unconsciously, it’s not uncommon to set up a series of limitations.

We tell ourselves stories and create a frame of reference for who we are, what happens in business, and how we perceive other people, and often lock them into being a particular way, even though they've changed over time.

It’s no secret that we think the brain is a marvellous mechanism. One of the unique things it does is allow us to practice method acting or character acting. Great character actors like Dustin Hoffman, Meryl Streep and Geoffrey Rush are able to identify and step into their character, using every part of their sensory intelligence until it becomes believable.  When it becomes believable, they sometimes have trouble coming out of that character.

Now, imagine a child arriving on the planet and developing a character that becomes that child’s way of operating yet might not fit with the authentic curiosity-driven self. That can start to create limitations on where our perception goes and what we think is possible.

What's the story you're telling yourself, and how does it support your success and enjoyment of life, or limit you?

Being open to possibilities

We often hear people say, "I can't be free of the business. It's tying me down." Or, "The markets aren't right so that's why I'm not getting ahead." While that may be true to some extent, it's also a story that's been set up, that keeps us within that limiting pattern. Therefore, we’re not looking for other options or other opportunities and possibilities that actually exist.

What opportunities might open up if you were able to be a little more free in the business? Would that allow you to strategise differently rather than running around telling yourself you're worn out, pressurised, and not free?

We encourage you to be open to the possibility that you are in a story that is motivated and driven and exciting and adaptable. In other words, you're able to adapt and change to varying circumstances and seasons. Or do you limit yourself in some way - is that your story?

Think about your story’s genre and characters. What character do you play? The power broker, victim, unstoppable business owner? Think about the way your business is running in your story and its culture. Take notice of these things and consider whether your story needs to be rewritten.

Essentially, your story is a set of made-up decisions and belief structures that you’ve adapted to over time. They're the sort of things you might say to justify your position, to make excuses. It’s also where you look for evidence of your mistakes and what is and isn’t working. And yet there are a lot of other possibilities beyond where our current attention is.

So start to pay attention to the feelings attached to your story. Is it a drama? Is it an adventure? Is it a horror story? Is it a comedy? Is it war and peace? What if there were other possibilities?

Whatever genre you've unconsciously decided upon, there will be subtle nuances, actions, and strategies that you put in place and certain things you say over time; they're part of your story.

When you understand the ins and outs of your story, you can then start to consider what type of story you would write when your business and personal lives are getting the outcome you want.

To help with the process of adapting your brain, you might like to access our specially created ‘double induction’ meditation audio. The technique used in the audio helps disengage the conscious mind and let the subconscious create new possibilities through the imagination. You can access the audio here.

SUBSCRIBE FOR UPDATES VIA EMAIL TO THE MIND MATTERS PODCAST

We'll let you know via email when we release new episodes